The TALIAFERRO Project, a community act of kindness to honor and preserve the family research efforts of our cousin, Sandra TALIAFERRO.

Genealogy contributors will work to “repost” blog entries of San’s originally shared via her "I Never Knew My Father" genealogy blog (now offline).

Sandra didn't leave behind children or family to inherit her research legacy. In every way this body of work was her lifeline and that work is unfinished with open questions to answer.

The best homage we can pay Sandra, is the commitment and willingness to continue connecting the dots on her behalf.

In August 1969, my high school Russian class was given an amazing once in a lifetime opportunity to take an all expenses paid trip to Russia.  I often reflect back on that trip and how blessed we were, as young African Americans, to have such a unique experience.   We were accompanied by a photographer from Ebony magazine, and the trip was featured in the magazine’s November 1969 issue in an article titled To Russia – With Understanding.  We were also followed by cameras from the television news show 60 Minutes and featured in a segment on the show – Booker T. Washington High School Goes to Russia.  We were interviewed by a local television station here in Atlanta, and there was an article in the newspaper.  Yes, it was our “15 minutes of fame”.

At our 40th high school class reunion this past August, we were reunited with classmates from our trip.  This reunion was made even more special by a visit from our Russian teacher, Ms. Billie (Davis) Gaines.  Many of us had not seen Ms. Gaines since high school.  There were hugs and laughter, and yes, a few tears.  It was truly a joyous occasion.  There was much to share and reminisce about.  It was an evening we will probably never forget.  It was a night for –   Memories of Russia – Then & Now.

Bottom photo: From the personal collection of the owner of this blog. 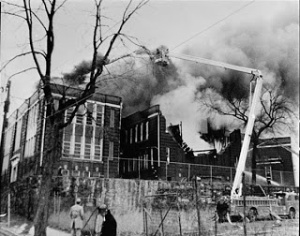 Recently, while searching through the Vanishing Georgia Collection at The Digital Library of Georgia I came across this photo of Walker Street Elementary School. Unfortunately, the photo depicts a fire that destroyed the building in January 1983. Walker Street became Atlanta’s third public (white) elementary school in February 1872. The building as it stood when I attended was built in 1911. It was converted to an elementary school for Blacks in the 1930′s.

Looking at this photo sadden me, but also brought back memories of my old neighborhood. Today, the neighborhood is known as Castleberry Hill; it’s on the west-side of Atlanta, just minutes from downtown. I don’t remember it being called Castleberry Hill when I was a child; I didn’t know it had a name – it was just home. Now the area is being rebuilt with lofts, condos and trendy shops so I guess they had to give it a name or call it something. The famous Pascal’s Restaurant even relocated to Castleberry Hill from its historic location on ML King Drive (formerly Hunter Street). Boy, have things changed!

I attended Walker Street from kindergarten through the fifth grade. Those were by far the best years of my childhood. My friends and I walked back and forth to school every day; no fears, no threat of harm. Most days on the walk home, we stopped at the little corner store for some two for a penny candy or cookies – Mary Jane was my favorite…Sugar Daddy…Bazooka Gum…coconut bars, and those little cookies shaped like a flower with the whole in the middle. I don’t think they had a name – “just give me a nickel worth of those”. We played hopscotch on the sidewalk, jacks and marbles, kick ball and giant step (May I, Yes You May) in the street, and fell asleep on the porch on hot summer nights.

We had a milkman who delivered milk, eggs and butter; a vegetable man yelling- “veg- a-bles, git ya veg-a-bles”, and in the summertime we all waited anxiously, with a nickel or dime, for the ice cream man. There was also the ice man, the junk man, the insurance man, the Watkins man, and the Fuller Brush man. Now that I think about it, seems there was a “man” for just about anything you needed. You could go to the grocery store without any money – “my mama said, put it on her bill.” We were carefree and happy. We were not sick often, but when we were the doctor came to our house. Were we poor? I didn’t think so…at least not through my child’s eyes. I never wanted for any thing. There was always plenty of food, a big warm house, nice clean clothes to wear, and above all, lots of love. This is not to say that all was peaches and cream. We took the trolley to town, but had to sit in the back, and ten minutes away doors were labeled “Colored” and “White”…but, those memories are for another time, another post. Today, I have fond memories of Walker Street Elementary School, and the old neighborhood – Castleberry Hill.

However, there is one ugly memory that I must share, or my recollections of Walker Street Elementary School would be incomplete. As happy as my memories are, I am forever scared by one vivid not so nice memory that haunts me to this very day. I remember it so well….It was the last day of school, a beautiful, sunny day. My friends and I were standing out front in the schoolyard gathering for the walk home, and ready to begin our summer vacation; there was laughter, joking, playing around. All of a sudden out of nowhere this boy runs up to me and plants an awkward kiss smack dab on my cheek. I WAS HORRIFIED!! I won’t say his name, but he will always be remembered by me as the boy who ruined my last day of school – fifth grade.

That summer we moved and I changed schools. It was sad leaving my friends and all the good times we shared. But, you know, it’s a good thing we did move because I was going be another year older, and ready to kick that boy’s butt if he tried something like that with me again!! 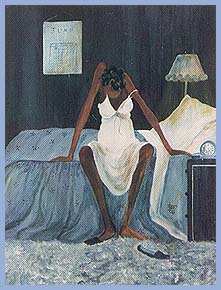 Researching my family history is a very emotional experience for me, as I’m sure it is for many researchers. Each newly discovered piece of information fills in another piece of the puzzle, but also presents you with more questions and creates even more empty spaces in that puzzle that is your family tree. Our family stories need to be told, and we were chosen by our ancestors to do just that…tell their stories. It is imperative that we record and preserve our family history. No one said it would be easy, but it is necessary. There are highs and lows, jackpot days and empty days, and many brick walls to tackle. It’s a roller coaster ride of emotions, and I love it all. Sometimes, however, I can’t help but wonder about the things I’ll never find, and….
Some Days I Just Wanna Cry! 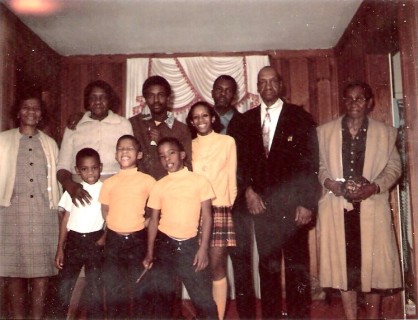 This is a photo of my MIDDLEBROOKS family taken one Christmas in the mid to late 1960′s. Whenever I look at this picture it makes me smile and warms my heart. It makes me long for a FAMILY REUNION. When I was a little girl, we would go down to my mother’s hometown of Woodbury, GA in Meriwether County for Homecoming Sunday. Other than the vague memories of these events, I don’t recall attending a family reunion. One of my greatest desires is to have a TALIAFERRO family reunion. I’m talking about an “official” family reunion- meet and greet, cookout at the park, tee shirts, family worship-a weekend of family fun and fellowship. My brother and cousins tell me there has never been a TALIAFERRO Family Reunion. The idea has been bounced around, but no one has actually taken the initiative and put one together. Maybe that someone will be me.